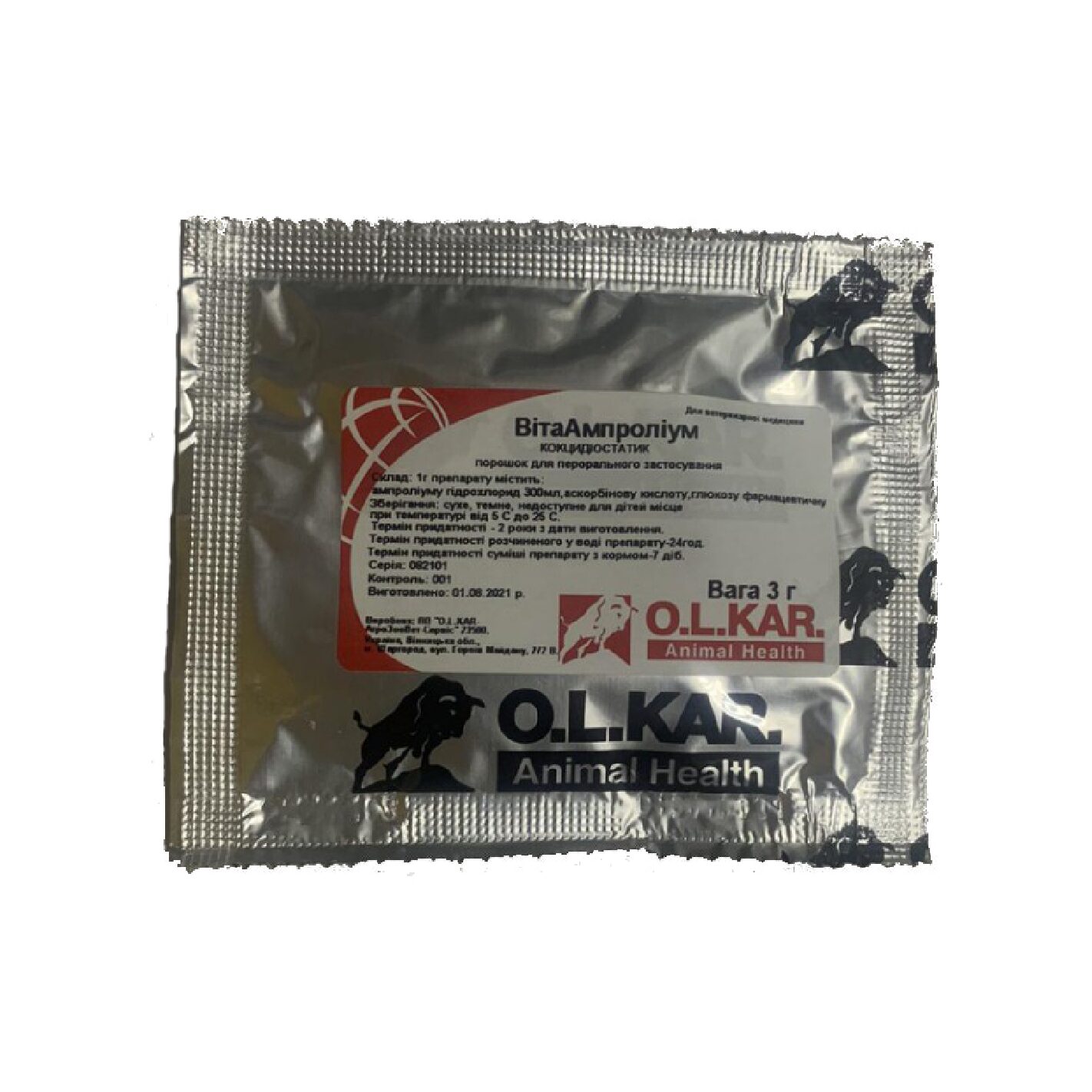 Powder from white to light yellow color with specific odor.

1 g of the drug contains APIs:

Amprolium is an anticoccidial agent that acts as competitive inhibitor of thiamine in the parasite metabolism, and interferes with the metabolism of glucides necessaries for coccidian multiplication and survival. In invitro studies it was shown that the uptake of thiamine by schizonts of Eimeria tenella and by host intestinal cells can occur through passive diffusion or by an active, energy-and phdependent process. Amprolium competitively inhibited both systems, however, the parasite was shown to be more sensitive to amprolium than the host. As shown with Eimeria maxima inoculated chicken, the administration of Amprolium resulted in a proportion of morphologically abnormal macrogametes and oocysts which may be considered the reason for a reduced sporulation rate. After oral administration absorption is low, reaching the maximum concentration 4 hours later. It is excreted mainly through faeces.

Ascorbic Acid (vitamin C) is a water-soluble vitamin indicated for the prevention and treatment of scurvy, as ascorbic acid deficiency results in scurvy. Collagenous structures are primarily affected, and lesions develop in bones and blood vessels. Administration of ascorbic acid completely reverses the symptoms of ascorbic acid deficiency.
An exogenous source of ascorbic acid is required for collagen formation and tissue repair by acting as a cofactor in the posttranslational formation of 4-hydroxyproline in -Xaa-Pro-Gly- sequences in collagens and other proteins. Ascorbic acid is reversibly oxidized to dehydroascorbic acid in the body. These two forms of the vitamin are believed to be important in oxidation-reduction reactions. The vitamin is involved in tyrosine metabolism, conversion of folic acid to folinic acid, carbohydrate metabolism, synthesis of lipids and proteins, iron metabolism, resistance to infections, and cellular respiration.

Blood glucose is an obligatory energy source involved in various cellular activities, and it also acts as a signalling molecule for diverse glucose-sensing molecules and proteins. Glucose undergoes oxidation into carbon dioxide, water and yields energy molecules in the process of glycolysis and subsequent citric cycle and oxidative phosphorylation. Glucose is readily converted into fat in the body which can be used as a source of energy as required. Under a similar conversion into storage of energy, glucose is stored in the liver and muscles as glycogen. Glucose stores are mobilized in a regulated manner, depending on the tissues’ metabolic demands.

Glucose supplies most of the energy to all tissues by generating energy molecules ATP and NADH during a series of metabolism reactions called glycolysis. Glycolysis can be divided into 2 main phases where the preparatory phase is initiated by the phosphorylation of glucose by a hexokinase to form glucose 6-phosphate. The addition of the high-energy phosphate group activates glucose for subsequent breakdown in later steps of glycolysis and is the rate-limiting step. Products end up as substrates for following reactions, to ultimately convert C6 glucose molecule into two C3 sugar molecules. These products enter the energy-releasing phase where total of 4ATP and 2NADH molecules are generated per one glucose molecule. The total aerobic metabolism of glucose can produce up to 36 ATP molecules. This energy-producing reactions of glucose is limited to D-glucose as L-glucose cannot be phosphorlyated by hexokinase. Glucose can act as precursors to generate other biomolecules such as vitamin C. It plays a role as a signaling molecule to control glucose and energy homeostasis. Glucose can regulate gene transcription, enzyme activity, hormone secretion, and the activity of glucoregulatory neurons. The types, number and kinetics of glucose transporters expressed depends on the tissues and fine-tunes glucose uptake, metabolism, and signal generation in order to preserve cellular and whole body metabolic integrity.

Polysaccharides can be broken down into smaller units by pancreatic and intestinal glycosidases or intestinal flora. Sodium-dependent glucose transporter SGLT1 and GLUT2 (SLC2A2) play predominant roles in intestinal transport of glucose into the circulation. SGLT1 is located in the apical membrane of the intestinal wall while GLUT2 is located in the basolateral membrane, but it was proposed that GLUT2 can be recruited into the apical membrane after a high luminal glucose bolus allowing bulk absorption of glucose by facilitated diffusion.

Apply with feed or water. The mixture is prepared in an amount not exceeding the daily nutrient requirements. Serving size should be the same during a day, applied individually or in groups in the following doses:

prophylaxis: from 3-5 days of age and during growing period, daily dose: 0,4 g of VitaAmprolium/1 L of drinking water or 1 kg of feed;

prophylaxis: 0,5 g of VitaAmprolium/1 L of drinking water or 1 kg of feed during 21 days;

treatment: 1 g of VitaAmprolium/1 L of drinking water or 1 kg of feed.

Poultry and animals with individual hypersensitivity to amprolium HCL

Meat (poultry) – 7 days (in the case of treatment)

Meat (poultry) – 2 days (in the case of prophylaxis)

Meat, received till indicated time, must be fed to unproductive animals or utilized.

Do not store at the same place with food products, beverages and animal feeds.

Shelf life of the water solution is 24 hours.

Shelf life of the product feed mixture is 7 days. 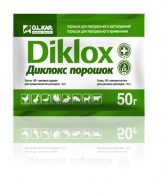 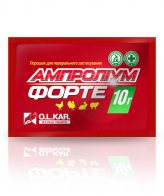