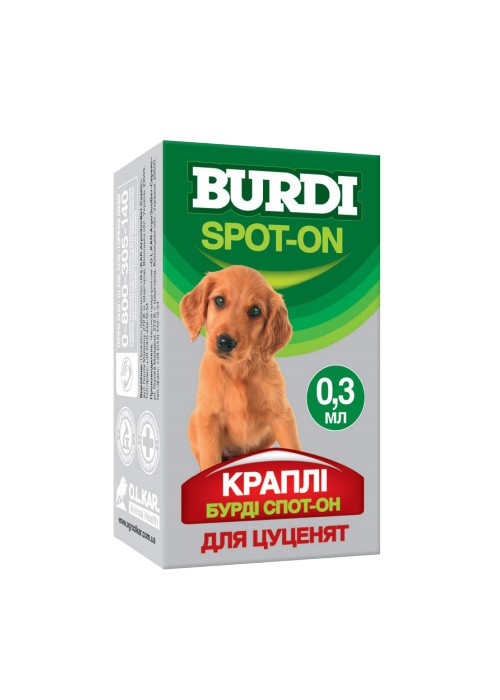 Antiparasitic action of ivermectin is based on blockade of neural or neuromuscular transmission by acting on the gammaamino butyric acid (GABA), resulting in blockade of momentum transfer between excitatory interneurons and motor neurons of the ventral trunk parasite, and this leads to the defeat and death of the parasite.

The mechanism of action ofpraziquantelprovides depo­larization of neuromuscular ganglionic blockers, infringe­ment of glucose transport and microtubular function of all phases of development of cestodes, which causes a disturbance of innervation of muscle, paralysis and death of parasites.

Burdi spot-on bythe degree of influence on the body belongs to moderately hazardous substances, at rec­ommended doses does not show local irritative effect, resorptive-toxic, embryotoxic, teratogenic and sensitiz­ing actions. Is well tolerated by dogs and cats of vari­ous breeds and ages. After contact causes irritation of mucous.

DOSAGE. The drug is used by drip («Spot-on») applica­tion on undamaged dry skin.

Before application in tube-pipette break off tip and de­ploying hair, apply the drug on the skin of the animal in a place inaccessible to lick off (in the neck at the base of the skull).

In case of processing of large animals pipette contents put in 3-4 places.

Depending on body weight, use drug of different pack­aging at the following doses given in the table.

For treatment of ear mange drug is applied on the skin once. During treatment is recommended to clean the ear canal from exudate and scab, and with complicated otitis appoint antimicrobial and anti-inflammatory drugs.

If necessary, repeat the treatment after one month.

With the purpose of treatment ofsarcoptic mange and demodicosis dogs and cats notoedric mangedrug is used 2-4 times with intervals of 10-14 days; to prevent in­vasion – once a month. For dehelmintization of animals at nematodosis and cestodiasis drug is used for thera­peutic purposes once, with preventive – once a quarter.

CONTRAINDICATIONS. Do not use to pregnant and lactating animals.

The drug is not recommended to apply on wet or dam­aged skin.

It is not recommended to wash the animal during four days after treatment with the drug.

Do not use simultaneously with other antiparasitic drugs.

Do not stroke the animal and keep away from children for 24 hours after treatment with the drug.

STORAGE. Dry, dark, inaccessible to children and ani­mals place away from food and feed away from heating appliances and fire, at temperature from 0°C to 25°C in a package ofproducer.

SHELF-LIFE – 1,5 year from the date of manu­facture. 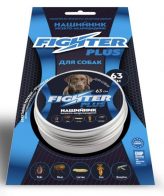 Drops Rex and Musya for dogs and cats
Insecto-acaricidal agents