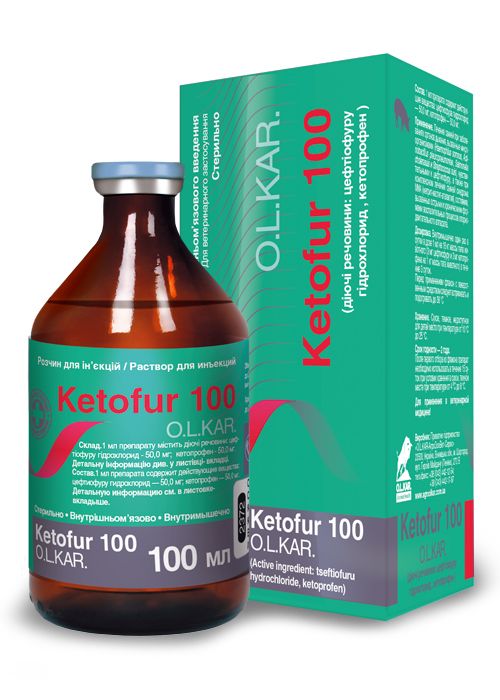 Ketofur 100
Release Type:
The vials are closed with rubber stoppers under an aluminum rim for 100 ml
Application:
Treatment of pigs in respiratory diseases

Oily suspension from yellow to brownish-yellow, with a slight smell of constituents, with storage is stratified.

Ketoprofen – Propionic acid-based NSAIDs. It has an analgesic, anti-inflammatory and antipyretic effect. The mechanism of action is associated with inhibition of the synthesis of prostaglandins at the level of cyclooxygenase. In addition, ketoprofen inhibits lipoxygenase, has anti-bradykinin activity, stabilizes lysosomal membranes, causes significant inhibitory activity of neutrophils. Ketoprofen is a dual inhibitor of inflammation, blocking the action of cycloxygenase and lipoxygenase and thus preventing the formation of prostaglandins and leukotrienes.

Ketoprofen is a painkiller that affects the central and peripheral nervous system. Its effect is to directly suppress the action of bradykinin, vasodilator and pain mediator.

After parenteral administration, ceftiofur is rapidly absorbed from the injection site and penetrates into all animal tissues. Its maximum plasma concentration is observed in an hour, which is maintained at the therapeutic level up to 24 hours, depending on the species of animals. Ceftiofur in the body is rapidly metabolized to the formation of desfuroilceftiofur, which has an activity equivalent to ceftiofur, relative to bacteria. This active metabolite is back ligated to plasma proteins and accumulates at the center of infection, while its activity is not reduced in the presence of necrotic tissues.

The removal of the antibiotic occurs mainly with urine and feces.

Treatment of pigs in respiratory diseases caused by microorganisms (Haemophilus somnus, Actinobacillus pleuropneumoniae, Salmonella cholerasuis and Streptococcus suis), sensitive to ceftiofur, as well as in the treatment of pigs with MMA syndrome (metritis-mastitis-agalactia), conditions caused by acute and chronic forms inflammatory processes of the musculoskeletal system.

Before use, the vial with medicinal product should be shaken and heated to 36 ° C.

Do not apply to animals with a high sensitivity to active substances or to any of the excipients. Do not mix the drug with other drugs in one syringe.

Do not apply to animals with acute renal failure.

Do not apply to animals up to 6 weeks old.

Do not use at the same time as other non-steroidal anti-inflammatory, diuretic or anticoagulant drugs, as well as with tetracyclines, chloramphenicol, macrolides, and linzamides.

Slaughter of animals for meat is allowed 12 days after the last application of the drug. Obtained, before the specified period, the meat is utilized or fed to unproductive animals, depending on the conclusion of the doctor of veterinary medicine.

The vials are closed with rubber stoppers under an aluminum rim for 100 ml. Secondary packaging – box.

After the first selection from the vial, the drug should be used within 15 days, provided it is stored in a dry, dark place at a temperature of 4 ° C to 8 ° C. 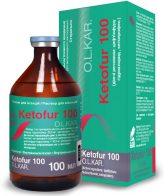