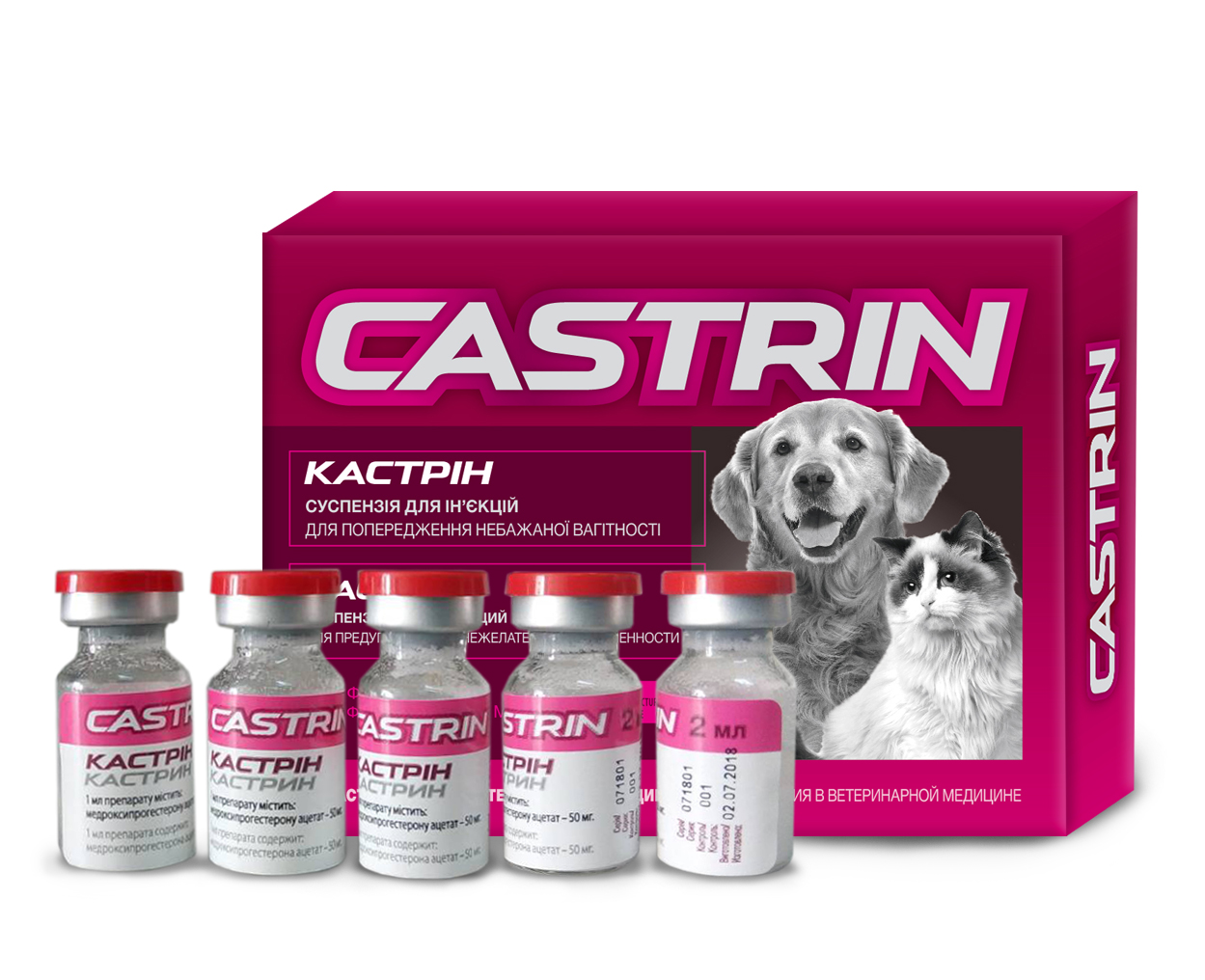 Castrin
Release Type:
Vials or ampoules of 2 ml, closed with a rubber crust under an aluminum rim, enclosed in a cardboard box.
Application:
For long-term prevention or interruption of cat’s and dog’s larvae and prevention of unwanted pregnancy; treatment of mental pregnancy and pseudolactation of females; treatment of nymphomania of cats.

White, with a yellowish shade, a suspension which is stratified during storage.

1 ml of the drug contains the active substance:

Medroxyprogesterone acetate is a synthetic progestogen, which has a longer duration of action than natural progesterone. Medroxyprogesterone acetate affects the hypothalamic-pituitary system, blocking the secretion of adenohypophysis gonadotropic hormones (FSH and LH). Reducing the level of gonadotropic hormones in the blood leads to a violation of folliculogenesis in females, resulting in inhibited follicular ovulation and no fertilization.

The drug is administered once in the subcutaneous area to the area of the fork or intramuscularly in the thigh in doses:

б) to prevent the emergence of the ovule – for 5-10 days before its appearance, for its interruption – within 1-2 days after the appearance of the first signs (change in behavior, the beginning of mucous discharge with an admixture of blood, attractiveness for people of the opposite sex):

For a one-time prevention of ovules, the drug is administered once on bacon no later than a month to a probable ovule, and to cats – immediately after the next ovule.

For a long-term prevention of the ointment, the drug is administered 5-10 days before the onset of the ovule, repeat feces after 5-6 months, for cats – 4-6 months later. In the case where the females, which was administered the drug exhibit signs of sexual arousal, it is necessary to make extraordinary injection of the drug.

For Siamese cats, the dosage of the drug is determined individually by a veterinarian.

Thoroughly shake the contents of the vial before use until a homogeneous slurry is obtained.

Keeping females and cats in order to get an offspring.

Breast tumors, treatment with other estrogens and progestogens.

Hypersensitivity to the drug.

Do not apply to animals before the first part.

Do not administer the drug in the postoperative period.

It is not recommended to apply females of gorseous rocks.

In some cases, the inhibition of the tongue may be permanent.

In females and cats, the ability to fertilize for 10 days may be maintained after administration of the drug.

After stopping the use of the drug, paired animals are recommended after the second stomach.

Vials or ampoules of 2, 5, 20 ml, closed with a rubber crust under an aluminum rim, enclosed in a cardboard box.

Dry dark is not accessible to children at a temperature of 5 to 25 ° C.

The expiration date is 2 years. After the first selection from the vial, use the drug for 10 days, provided it is stored in a dark place at a temperature of up to 8 ° C. 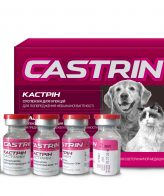 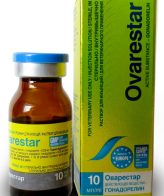